Welsh international Glyn was targeted in the summer of 1987 by his former manager Dave Bassett, but finally joined the following October having failed to settle at Newcastle. He spent two and a half years at the club, memorably winning the 1988-9 Player of the Season award after helping the team reach the Play-Offs. He left in 1990 to join Crystal Palace.

Most recently coaching at Stoke City, Glyn spoke to Watford Legends while working at Fulham in 2011.

Hi Glyn, thanks for talking to Watford Legends. You were with Wimbledon, then Newcastle, and then joined Dave Bassett at Watford. How did that move come about?

My contract was up at Wimbledon. Watford, QPR and Newcastle were interested in me and I had the summer to think about it.  I liked the idea of leaving London and going up to Newcastle. After four months I realised I’d made a mistake. It just wasn’t what it said on the tin. So I came back down and had a chat with Watford and Dave Bassett and signed pretty much straight away.

What wasn’t right at Newcastle?

I was playing out of position for a start, the results weren’t great, and I suppose it just wasn’t a good fit for me. Other players will confirm that sometimes you get a feeling if you are not going to settle, and that for me was one of those times. I could have toughed it out but the opportunity was there to come back down so I took it.

And how did you enjoy your time at Watford?

Yes, I enjoyed it. I joined with Dave Bassett in charge, and I know he didn’t go down very well with the fans but I think that anyone following the regime before would have struggled. I think Dave lasted three months after I got there. I stayed on for two and a half years and played under another good manager in Steve Harrison, and the fans were always good to me. It was an enjoyable time.

With the Dave Bassett era there seems to be quite a split. Some established players at the club didn’t like the changes that were happening whereas other players that came in at that time feel that you have to move with the times to progress. How did you feel about it?

I don’t think it is a case of being stuck in the mud but I think Dave struggled to implement his ways with a lot of the more senior players. Some of the younger ones were fine, they just went with it. These things happen and he was successful elsewhere, so I guess it was wrong manager at the wrong time for Watford.

Does any particular game stand out for you as a personal highlight?

We beat Arsenal at home which was great but really the rest of that season was all about fighting relegation. The seasons afterwards with Steve Harrison made Watford a good place to play and a good place to be. We finished with a shout of the play offs and had a good run. I just wish we could have had a bit more success and got back up

Did you have any players who you got on particularly well with?

There were a lot of good lads actually; Kenny Jackett, Gibbsy, Gary Porter, and younger lads like Iwan Roberts were coming through. Yes, they were a good bunch.

Do any goals stand out for you?

I think I got two goal of the season awards in two years. I think I scored a couple of good ones. I remember scoring against Oldham at home and Barnsley away. I remember Barnsley away as they let the Watford fans move in to the stand to get out of the rain and cold! I hit the ball and it travelled with the wind and rain and went in to the top corner. So two great goals that won me the award but I like to think I was a part of trying to make goals as well.

It definitely meant a lot. When people like Dave Bassett didn’t go down well, it was good for me, as a player he brought in, to go from strength to strength and do well for the club. So to get the player of the year was the icing on the cake that season.

What made you go to Palace?

I used to sign contracts and let them run out and then see what is around. I did the same with Watford and Colin Lee was trying to negotiate to keep me. But I fancied another challenge and I could have either gone back to Dave Bassett who was at Sheffield United, back to Wimbledon or on to Palace. I liked the idea of working with Steve Coppell, who as a right sided player in his time would be good for me as a winger myself.

I moved with no issue with Watford though, I’d had a great time.

You stayed with Sheffield United for a few years. A different world for a Londoner!

Yes I finished with Palace in 1991 and have stayed up there until just recently when I have moved to Surrey. So I have a wife and kids who all have funny accents! But it’s a lovely part of the world and everyone loves their football.

So what are you up to now?

I’m coaching at Fulham as I have been part of the coaching team with Mark Hughes over the last few years. I’ve also worked with him at Manchester City and Blackburn. I have a year on my contract left so who knows after that, but for now I’m at Fulham and getting ready for the season.

If we were to put a pin in the calendar for five years time, what would you like to be doing?

I have no idea. In football, anything can happen. Look at Brian McDermott at Reading, Chief Scout, Reserve Manager and then got the big opportunity. You don’t know what is round the corner but in this day and age in football it’s good to keep working.

I’d like to have an opportunity in management again, but you never know when or if it may come.

Thanks for your time Glyn. Best of luck for the coming year. 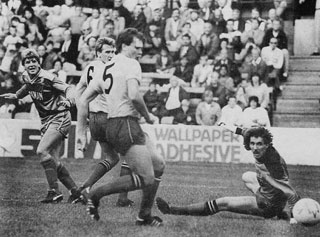