Embed from Getty Images
This piece first appeared on EachGameAsItComes.com in June 2012.
Just before Euro 2012, you may have seen a programme on BBC with Tim Lovejoy, taking a typically juvenile look at what it takes to be England manager. Only a couple of those who have actually held the role were interviewed, Sven was one, Graham Taylor was the other. There were then expert opinions offered by a clutch of others…journalists, celebrities (allegedly) and the like. You may be aware that at the time, one of Graham Taylor’s roles was as Chairman of one of the football clubs where he made his name, Watford, and not long afterwards, he resigned his role. Although disappointing this wasn’t a huge surprise, he was always the reluctant leader as his priorities were his media work.

The name Graham Taylor will always bring up, to put it politely, a mixed reaction from the footballing public. His time as England Manager was not successful, as he failed to lead his team to qualification for the 1994 World Cup. As a lot of opinion is very much led by the press, this makes him a football fool of the highest order, a national disgrace. Any questionable selection is brought to the forefront of the argument, any excuses or reasoning is overlooked. The usual issues of his three and a half years in charge are the selections of the likes of Carlton Palmer and Geoff Thomas, the overlooking of ageing but experienced stars such as Peter Beardsley and Chris Waddle, the substitution of Gary Lineker in Euro 92 (even though his form was dreadful in the competition), and the selection decisions in the World Cup qualifier in Norway. And the issues overlooked are the injury crisis at Euro 92 that left the squad without any creativity, the continued absence and subsequent poor form of Paul Gascoigne, and the long term injury to Alan Shearer. Nevertheless, one man you won’t find making excuses is the man himself. And this is why I mentioned the Tim Lovejoy programme. It may have been in the main, a juvenile look at the toughest job in football, but there was one moment that brought a lump to the throat. Despite all the criticism he’s faced for the time when he took on his dream job, there is no bitterness from Graham Taylor, just intense disappointment that, in his own opinion, he didn’t do a good enough job. He failed to meet his own high standards. So when some football genius derides his managerial abilities, bear in mind that no-one hurts more for his failure than the man himself.

Visit a small part of South West Hertfordshire however, and the name Graham Taylor will bring a very different reaction. This is the same area where I learned and fell in love with the game of football, and much of that is down to this man. And as a result, I make no apologies for defending his reputation, and there are many others that would do the same.

Most know the story. Taking over managing a fourth division club with a superstar owner in Elton John, and in just five years taking the club to the First Division for the first time in their history. Leading them to runners-up spot in their debut top flight season, second only to the mighty Liverpool team of that era. The following season (in which I went to my first live game), taking the club to an FA Cup final against an emerging force in Everton. Successive top half finishes in every season for an unfashionable Hertfordshire club on the doorstep (and therefore catchment areas) of the two North London clubs, and an impressive production line of young talent, most notably John Barnes. He left for a recently relegated club with arguably more potential, Aston Villa, leading them back to the top league and a runners up spot the following year. Then came England, and a spell at Wolves, where his dismissal seemed to relate more to his England reputation than his performance. Fed up with the game, he was only tempted back to management by the calling of a club that loved and respected him, and that had suffered in the doldrums since his departure ten years previously. They say miracles don’t happen twice, but Taylor led a team in the third tier to their first season in the Premier League, however this is where the fairytale ended, with harsh money dominated league came inevitable relegation. Despite Taylor retiring a year later, he briefly returned to management with Aston Villa, before embarking on a media career, following in the footsteps of his late father.

That’s the story everyone knows. If I were to defend the man, a lot of critics would base the defence on the success he brought to the club I support, but point out that his tactics were prehistoric, and just wouldn’t work in the modern game, and though the game Watford played was massively simplified by many, they may have a point. However there was more to it than just the football on the pitch, and I will try to give examples to describe this as best I can – however should you want to learn more I suggest a read through this book and it will explain it far better than I can.

Graham Taylor did not just manage the football team, he created a club. And the club was part of the community, and as a result, you felt like you mattered. As a young starstruck football loving kid, it meant Watford Football Club became part of my life. There was events for “Junior Hornets” to attend every month, from coaching sessions to just fun days. And here is the first example of why the manager was a different class, which I didn’t find out until years later when my Mum mentioned it in passing. I was at a fun day at a local leisure centre, loving one of those bouncy castle things which meant you could try doing ridiculous back flips without fear of hurting yourself. Well, I did hurt myself. Fell off the thing and split my lip open. I didn’t think it was too bad, but they took me to hospital anyway to get checked up. I remember sitting there for three hours while my Mum was chatted up by a drunken workman. I got a bit of mopping up, then home. What I didn’t know, is that later that evening, my Mum got a phone call. From Graham Taylor. The manager of a club in the top half of the English First Division. Why? To check I was ok. A single kid out of several hundred attending the event who went to hospital with a cut lip, but he took the time to find out our phone number and check I was ok.

Years later, after enjoying Taylor’s second spell at the club, and upon hearing of his retirement, I wrote him a letter. I just wanted to say thanks, for the years of football enjoyment he gave me as a young lad, then the return of some sort of success to my football club as a young adult. It didn’t take long, it wasn’t much, but I felt the need just to let him know what it meant. And I got a letter back, not a standard one, but written in response to mine, simply to say thanks for the support, and humbly suggesting that I had somehow exaggerated his achievements. I understand this was typical of the man, even if the letter was critical. He took the time to write back, always giving people his time.

Hopefully the two examples I’ve given will explain why I, and many others will always defend Graham Taylor. We’re not so blind as not to recognise that he didn’t achieve all that he should as England manager. Maybe we are more balanced in our views, maybe looking at things through excessively rose tinted spectacles, but the man himself would probably tell us to stop being silly and that he just didn’t do well enough. However, that will never excuse the untold criticism he received by the press at the time, and the sheep that follow the tabloid newspaper headlines like some religious gospel. He did his best, and it wasn’t good enough for those who for some peculiar reason felt that England should be dominating world football. He did his best for Watford, not just for the club, but for the community and he made a difference. He helped create a club, provided enjoyment and entertainment for thousands, was a massive influence on the careers of numerous footballers. I hope he can look back on his career and know that he is genuinely appreciated by a lot of people. As always, thanks Graham. 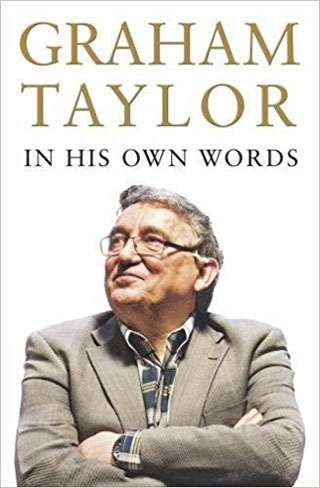